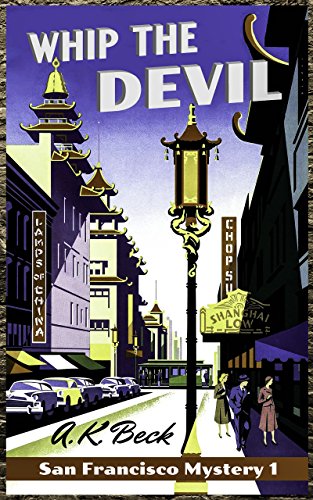 A compelling mix of traditional private investigator, elements of cozy and humor, a generous dash of noir and a baffling whodunit. Whip The Devil takes place in 1950’s San Francisco and is mindful of classic Golden Age mysteries.

Whip The Devil proved to be hard to categorize. The main characters are Meredith Cebrelli― an heiress, socialite and recent bride who enjoys all the privilege that comes with her position. Her partner is Valentine Lynch―smart, intuitive, handsome, troubled, and a graduate of the school of hard knocks.

When her husband Robert is called to duty in Korea, Meredith is consumed with worry and boredom. She impulsively decides to join Robert’s private detective agency, failing under the care of his partner―Val Lynch.

Meredith’s plans to ease into her new role are altered when they are offered a generous fee to vindicate a young man convicted of murder. Her acquaintance with the victim plunges her into the heart of the mystery.

As they assemble their investigative team, Val and Meredith begin asking questions about a crime everyone believes solved and meet the intriguing characters that will eventually lead them to the mystery’s solution. They include: the murder victim’s beautiful, young widow; his arrogant son; an eccentric sister with a long memory; a cocaine-addled heiress; a bitter business associate; a B-movie actress with a startling revelation; and an authentic trance medium.

“Meredith is unaware of the consequences of her decision and how much her life―along with others, strangers to her now—would be transformed. Four people–alive and blissfully ignorant of their Fate, would be dead. Stunning secrets would be revealed, a terrible wrong righted, and a pauper would experience an astonishing reversal of fortune. And she’d undergo a transformation, treading an unknown path toward an uncertain future.”

Whip The Devil is my debut novel, with more adventures in the pipeline.